A family house for the generations 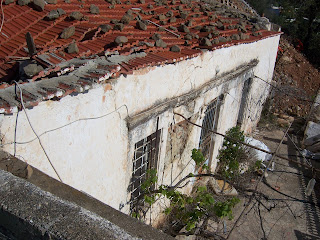 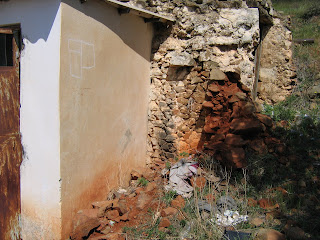 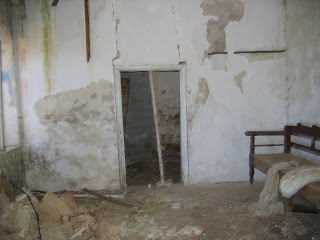 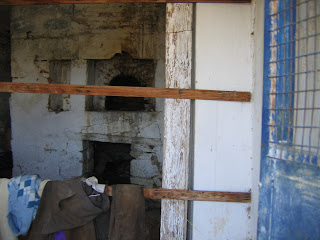 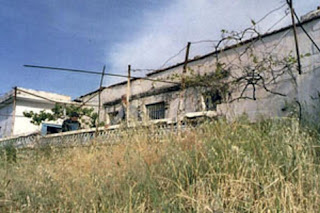 We have bought an old tumble down house which has been empty except for squatters for around 30 years. Its around 100 years old and partly home built. It is an opportunity for us to save a house and also an opportunity to create a family house that can be a constant as the children grow and move on in life. It will be project for many years for us. We will work on it ourselves along with a builder friend of ours. Any specialist work will go to the local community. The village is an old farming village with a population of just 390. The local economy is not good and a handful of outsiders buying semi derelict houses (animal sheds etc) has revitalised it a litle by giving farmers some capital to kick start their own businesses, built new green houses or experiment with different crop rotations. We were interviewed by a Sunday paper report who was very nice but didn't really 'get it' and this is the resulting article.

WHEN Liz went on holiday to Crete the last thing she expected was to find a husband. Now, 20 years after she met and fell in love with fisherman Antoni, the couple are building their dream home on the island. Here, Liz, 45, tells KAREN ROCKETT her Shirley Valentine story...
'I WAS 24 and working as a finance clerk in London when I went on holiday with a girlfriend to Crete. We met up with some other people, as you do, who introduced me to one of the fisherman who worked in the village.
He was my age and working as a fisherman, earning money to send to his family in Syria. Many of the fishermen on Crete are from Syria. The fishing industry would collapse without them.
He didn't speak much English and at the time I didn't realise how little he understood as he just kept saying "yes" to everything! But it was pretty much love at first sight. After the holiday was over I flew back to London to collect some clothes, walked out on my job and flew back to Crete. We rented a room and I worked as a waitress while we tried to sort out a visa us to come to England. It took some doing but we got it in the end and came back to live at my parents' house in Hampshire.
We had to marry within 28 days of arriving in England which we did on January 20 1989.
I went on to qualify as a chartered management accountant and my husband , set up the Blue Dolphin Swimming School. We settled near Winchester and had two boys who are now 17 and 15. But every year we'd go to Crete on holiday and recently we started looking for a holiday home.
Finally last October we bought a plot of land in Klima as close as we could to Aghia Galini, where we met. Aghia Galini, is on the coast and all we could afford there was a small apartment, so we bought this place just ten minutes away further inland.
We paid about pounds £34,000 (using Currencies Direct to transfer the money) for the land and the one-storey stone building on it last October. So far we have spent about £52,000 on building work.
We are using a local builder, who is a friend, so it is going to be slightly cheaper.
We expect to spend around pounds £135,000 for what will be a three- bedroom, two-bathroom house. We will put in a swimming pool too and are hoping it will be finished next year.
A similar place where we live in the UK would cost three times as much.
The house will be a permanent reminder for us of where we first met.
Both of us are very romantic and the idea of living out our days on Crete where we met all those years ago really appeals to us.
The people on Crete are so warm and friendly and I can particularly recommend the fishermen.;
Posted by Lizzie @ her homeworld at November 29, 2007