So one of the things I brought a lot of back from Crete last year was olive oil. My neighbour sells it retail and lots of friends asked so I brought a load back. This year its even more popular. So rather than just buy it for them should I buy it for me and sell it on? I was thinking that might be a good idea but if we are leaving the EU then is it suddenly going to get very difficult. The oil in fantastic, sells itself really, so it is full of potential. One lady at work wants 20kg, for herself and an artisan bread making friend. What to do, what to do. I don't mind making the effort as my neighbour is very kind and gives us so many things, like the best olives in the world, but does it have any potential. Having said that there is a family which has trees right there in our valley which sells their oil in Brighton. They seem to live half a year in each, and it seems to be doing very well.

Last year I took my camera to the market and photographed all the things I thought people would like and posted them on facebook. It doesn't sound much but to a few ladies in Matala market I think we made quite a difference. The house across the road from us is being extended and having a new gable end fitted in the extended roof, and all re-tiled. Its brilliant to watch. these guys so know what they are doing, and so effortless. Maybe its the same as I am with Excel but theirs really looks more impressive!  The guy on the scaffolding is literally throwing piles of tiles up to the guy on the roof and he is just like dealing cards with them. Makes me inclined to re-roof my house. Stop it! There is enough to do already...........

Most of the mess has disappeared with Jamal, so a quick vacuum right through and it looks okay again. Except that now Fahed is refurbishing a mirror in the conservatory. At least he did the main rubbing down in his shed. I am hopeful of the rubbing down between coats being in the garden but who knows. At least I get a mirror out of it. He is using the paint I bought for the front door and never got around to using. But, like the roof tile guys across the road, glad somebody has the skills to do sometihng useful with it 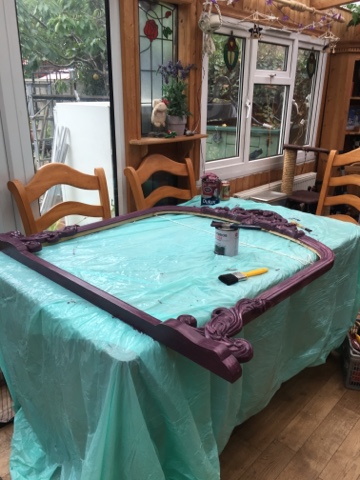 Jamal has been at home for two weeks. My house looks like an episode of hoarders! However i think even he has had enough of it. So now he has two more weeks at University and then we go on our road trip (headscarves and sunglasses at the ready) to pick him and his junk up from Newcastle. Then we have a refurb week where we dump all his old rubbish and finish bedroom decorations, and I am assuming make a horrendous mess of my whole house with his junk. Then we know if our future is sleekly de-cluttered house or hoarders, the UK edition.

Today I have another box of stuff, and a bag of books to go to the Salvation Army too.  General cleaning might as well wait until after he leaves tomorrow or else it will only need doing again!

The good thing about that is I don't need to do any housework today and I have a clear conscience about it!