We had a really good day yesterday. Beloved had two cancellations at work so was home quite promptly ( but doesn't get paid for missed lessons - not so good.) We headed for the craft fair a bit earlier than I was expecting. It was in the grounds of Broadlands House, home of the Lord & Lady Brabourne, and previously home to Lord Mountbatten of Burma.

The marquees were not close by the house but we had so impressive views of some of the grounds (thank you, Capability Brown) I have visited the house before and its really nice, not particularly grand and quite the sort of place I could imagine making myself at home. There were several marquees of stall but not too many craftmen doing anything interesting to watch (last few hours of the last day of a winter craft fair - hmm, was I expecting more.) There were also smaller tents outside with ferrets, cute but smelling a bit ferrety for my liking, and owls. The owls were really beautiful, standing just a couple of feet from us & posing (happily?) for photos to raise money for an Owl charity. There was food but not as good as we had waiting for us at home, so its was homeward bound to our beef stew.

Beloved and I don't see each other so much. I work from around 8am to 6pm. He goes to work at around 3pm & can be gone until 10pm some days. Weekends are his busiest time. He used to work until late on Sunday too but now is finished by 2pm. So we decided we will make an effort on A Sunday afternoon to do something together. Not always a craft show, maybe just a walk, or gather chestnuts, but not visiting others, just time to ourselves for a change.

I am gathering few ideas. 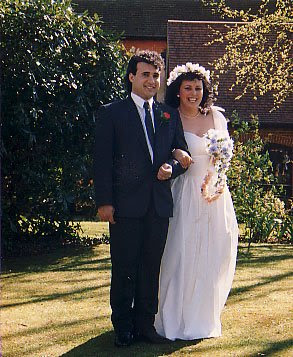 Winchester Cathedral Christmas Market, and Ice Skating starts at the end of the month. That's definitely on my list.

We will have been married 20 years on January 20th and we just started dating
Posted by Lizzie @ her homeworld at November 10, 2008