The middle of summer on the sunny south coast of England, and the rain is falling heavily enough to keep us indoors again. We were hoping to do some concreting in the back garden today so hopefully it does perk up.

My big black cat has just come in from the rain and looks so wet that he could be a river creature. He is purring like crazy as he washes himself dry so i guess he either loves the rain or loves no longer being out in it. 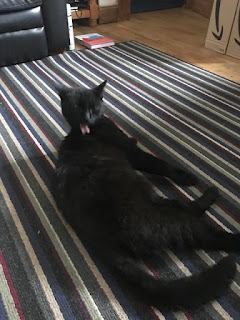 I bought Fahed a bottle of cola when i did the shopping last week. He used to have 8 bottles a week but I have been weening him off. When i went to put it in the boot of his car i found the last two weeks still in there. This is since ibought some of the 2l reusable water bottles. He fills them after use and puts them in the fridge. They are big enough to stay cold right through his swimming sessions if he wraps them in a towel. I am very pleased with him, Better for him, better for the environment and better for my shopping budget.

I made 5 jars of jam. Its not a lot but it took a bucket of plums, less the overripe and bug infested ones. I dont think I realised how little jam you can get from a bucket of fruit. So much for my idea to bottle Chinese plum sauce. The tree still has a little fruit but its really all to overripe. My jamming facebook group tells me that jam etc from them wont set.  Dad cant pick the plums as his tree is on uneven ground but he got a couple of younger neighbours (i.e. one in her 80's and one in her 60's) to come in and help themselves to those which we failed to pick and use. But we ate loads. However very few were wasted so thats good. I roasted the plums for about half an hour, then made jam as usual but also inludes about 30g of fresh ginger. Its really there in the finished jam. Very lovely.

And look. I made labels! Well i used an online thing to make them and printed them at work so y'know, i sort of made them. 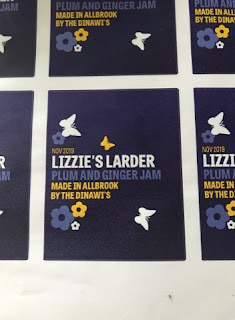 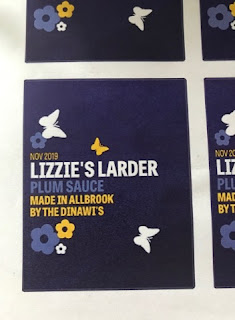 Talking about facebook groups. I have joined one for jams and stuff, one for fermenting and one for cheesemaking. Added to that I have unfollow nearly everyone I know plus all news sites, suddenly the world is a much happier place.

Have a lovely week everyone out there and dont get bogged down in the nasty stuff.
Posted by Lizzie@her MFW Homeworld at August 18, 2019