Covetting my neighbours ox and ass 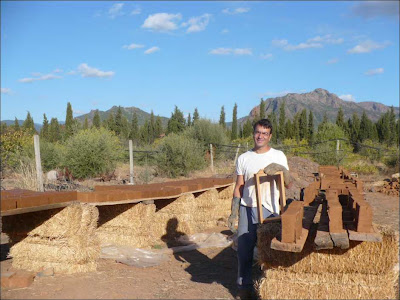 I had an email this morning from a friend who lives on the Island near by. They bought a lovely bungalow a year or so ago. It has a large garden which gives onto some woodland and then onto the beach. When they put up the kids trampoline it isn't even noticeable in the garden. In my garden it means you can only walk around it single file. They have spent a year having the house renovated and enlarged. It was already pretty magnificent, I have to say. There is a semi-external Jacuzzi room, the kids rooms are virtually separate apartments and the garage is around the same size as my house.

My friend work very hard and investigate their projects properly for home and work. They are lovely people who deserve their house but for a fleeting moment I did have a twinge of the green eyed monster. To live in such a house would make you happy to get up every morning, wouldn't it? Just to see the view over your own garden and down to the sea.

But after that little millisecond I thought about it a bit more. I aspire to a house with a bigger garden to keep my chickens and grow my veg but I don’t need luxury. I would like a house with a view but my house is on the edge of the country and really in a beautiful area itself.

Whilst I was still musing on this point I opened another email. This time from a friend who lives in Sardinia. He had a new daughter and was building a house on some land he bought years back but hadn't been able to afford to develop. In the photos he isn’t just building the house for his lovely family, he is actually making the bricks. His house will be his home & our house is our home. I dont need luxury but its not bad to aspire to something you dont have as long as its no obsessional.

The phpt shows my lovely friend moulding some of the bricks for the house.
Posted by Lizzie @ her homeworld at February 20, 2008

Email ThisBlogThis!Share to TwitterShare to FacebookShare to Pinterest
Labels: home