Snuggled up with Jamie Oliver 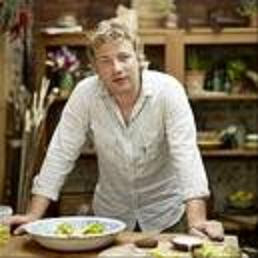 I seem to have developed tonsillitis during yesterday. I felt progressively more awful during the day and my brain ceased serious activity mid afternoon. I came home and snuggled up on the sofa with blanket for a few hours, with my youngest son for company. Nine o clock I headed to bed, so when Beloved came home from work, with Night Nurse and soft tissues,I was snuggled down in my bed with Jamie Oliver. I have had the Jamie at Home DVD for ages but I have never got to watch it because my house is full of men who like to watch action, adventure & comedy, not gardening and cooking. However, it was great. I saw the first few episodes and fell asleep but woke up just as the last episode was finishing. Beloved, who I would have bet real money would not watch a cookery programme, had watched both disks to the end!

Beloved is already quite serious about his food but I tihnk he might actually have realised the benefit of homegrown vegetables too. How can I build on this? He seemed particularly impressed with the squash and pumpkins. I will make plans.

I have found a beautful template which I would like to use for my blog but I dont seem to have the necessary skils to make the change (plus now, my last remaining brain cell has gone in to hibernation). Emmani at Indian Earth is going to help me but read up on her busy life at the moment to see why it wont be for a day or two!

My parents have been married for 58 years today. They are off out for lunch togther later. I dont think I wil pop down to see them today as I dont want them catching whatever I have. I will take them flowers, or more likely a plant, later in the week.